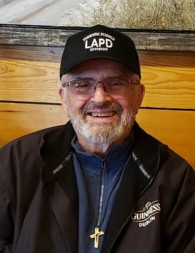 William (Bill) P. Holderness, 83, was received into the loving arms of Jesus surrounded by the love of his wife, his children, and grandchildren at St. Joseph’s Medical Center in Brainerd on May 23, 2022.

Bill was born in Alhambra, California, on October 1, 1938, to Walter and Eleanor (Enos) Holderness. He was proud to have served in the US Army as a Military Policeman. After being honorably discharged from the Army, he worked for the Auto Club of Southern California for thirty years until he retired in 1992.

Bill loved to fish as well as all things outdoors. He enjoyed gardening, bird watching, and NASCAR races. Bill was also a devoted model car hobbyist, having built over three hundred model cars ranging from Formula One to NASCAR.

Bill is preceded in death by his parents, his brother Steve and his beloved sister Janet.

To order memorial trees or send flowers to the family in memory of William Holderness, please visit our flower store.