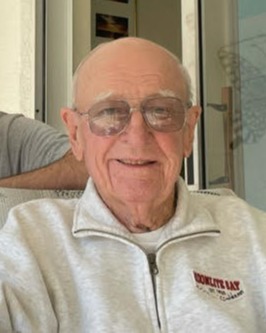 Warren Robert Heidemann born November 15, 1933 in Nicollet, Minnesota passed away on October 15, 2022 at the age of 88. Warren grew up in Courtland, Minnesota and graduated from New Ulm High School.  He met and later married Marlene Kornmann on June 21, 1958. Warren and Marlene lived in Brownsburg, Indiana for many years and eventually moved back to Minnesota where they settled in Lakeville. They raised their three children in Lakeville and Warren worked for the FAA in Farmington, MN as an air traffic controller and later a computer programmer. After retiring, Warren and Marlene sold their Lakeville home and split their time between new homes in Naples, Florida and Crosslake, Minnesota. Warren and Marlene were active members of Crosslake Lutheran Church.  Warren always loved being near the water and enjoyed boating, fishing and even waterskiing. Many wonderful summers were spent on the Whitefish Chain in Crosslake where Warren taught his granddaughter how to fish and the family enjoyed endless boat rides, bonfires on the beach and, of course, many games of Warren’s favorite Rumikub (Warren always kept score and rarely lost a game). Warren was an avid golfer and only stopped playing a few years ago. A favorite pastime was watching the Twins. Warren’s love of baseball began in Courtland where he played on the Courtland baseball team. Warren’s children played little league baseball and softball and he coached and could always be found at every game cheering in the stands. Warren loved Indy car racing, an interest that first began while living in Indiana not far from the track. He and his family traveled back to Indiana each year for the race and Warren actually attended every Indy race from 1959-1999. Warren loved duck hunting as a child, something he and his father did together often. He passed on that love to his sons and many days were spent on Swan Lake where Warren used to hunt with his father.  Warren was a proud veteran, having served in the US Air Force. He was a lifetime member of American Legion Post 500.

Warren is survived by his wife of 64 years Marlene; sons Steve Heidemann and Scott Heidemann (Rose); daughter Cheryl Haglund (Keith); granddaughter Ingrid; step granddaughters and step grandsons, as well as many other family and friends. Warren is pre-deceased by brothers-in-law Lloyd Kornmann and Robert Kornmann; nephew Jeffrey Delp and his parents and grandparents.

A service will be held on Saturday, October 22, 2022 at 11:00am at Crosslake Lutheran Church in Crosslake, MN, with visitation preceding at 10:00am.  There will be a luncheon to follow.  A private burial is planned in Crosslake.

To order memorial trees or send flowers to the family in memory of Warren Heidemann, please visit our flower store.