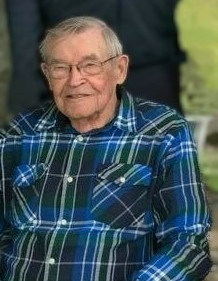 He was born on July 20, 1934 in Pelican Rapids, MN. He enlisted in the Army in 1953 for 3 years.  He was stationed in Detroit where he met his wife Grace Alice Jeroue.  In 1963 he joined the Warren, MI Police Department.

In 1967 Grace and Vern moved their family to northern MN where they purchased the Poplar Point Resort on Lake Ossawinnamakee in Pequot Lakes which they ran for 10 years.  Vern enjoyed fishing, hunting and fast cars.  They remained in the Brainerd area until 2021.

Vern is survived by his wife Grace, sons Jim (Shelly), Doug (Jennifer), Ken (Sue), and daughter Sherry.  He had 8 grandchildren and 4 great grandchildren.

A memorial service will be held on June 16th at the Brenny Family Funeral Chapel- 7348 Excelsior Rd. Baxter, MN 56425 at 12 noon.  Memorial donations may be made in Vernon’s name to the Tunnels to Tower organization.

To order memorial trees or send flowers to the family in memory of Vernon Wangen, please visit our flower store.