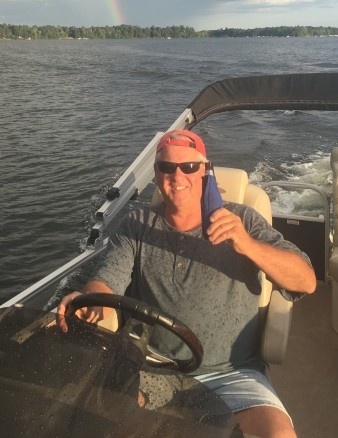 Timothy J. Gleason, 62 of Pequot Lakes, passed away on April 6, 2021 at his home after a well fought battle with cancer. Tim was born September 15, 1958 in Minneapolis to Joseph and Elaine Gleason.   He is proceeded in death by his father Joseph L Gleason.  Tim is survived by his wife of 36 years, Jacqueline of Pequot Lakes; Mother, Elaine (Solberg) Gleason; Siblings, Katie (Tom) Freemark, Bridget (Dan) Barrett, Martha (Will) Jensen, Daniel Gleason; many nieces, nephews, extended family members, and friends he held dear.

Tim grew up on Medicine Lake enjoying waterskiing, fishing, hockey, dirt bikes, and boating.  He attended school in Hopkins, MN where he met the love of his life Jackie.  They were married six years later in Maple Plain.  Tim followed his dad’s footsteps and worked in commercial construction, first as a laborer for Northside Roofing, then at Kirkman from 1983-1997, and then later as a 49ers operating engineer superintendent for Atlas Foundation in Rogers, Minnesota until his retirement in 2013.

Tim stood handsomely tall, but his charming smile and loving heart is what drew people to him. And, in return he was loyal, kind and always reliable for spontaneous adventures complete with sharp Irish wit. His hardworking and generous actions defined him. He showed up for his family and friends, especially when it involved the outdoors. He loved fishing, snowmobiling, boating on his pontoon, ATVing, riding his motorcycle, hunting, and camping where he was known to be “fond of a good blaze.” He thoroughly enjoyed life, even the coldest of winters and the hottest of beaches.  With his bride by his side, he always jumped at the chance to explore the United States, especially Hawaii, as well as the rugged outdoors of the West.

Funeral Services will be held at 4PM on Friday, April 16, 2021 at Timberwood Church in Nisswa.  Visitation will be held 1 hour prior to service on Friday.  Arrangements have been entrusted to Brenny Family Funeral Chapel, Pequot Lakes.

Tim lived a life to be celebrated. Please join us in the Irish tradition of raising a glass in his memory.

To order memorial trees or send flowers to the family in memory of Timothy Gleason, please visit our flower store.