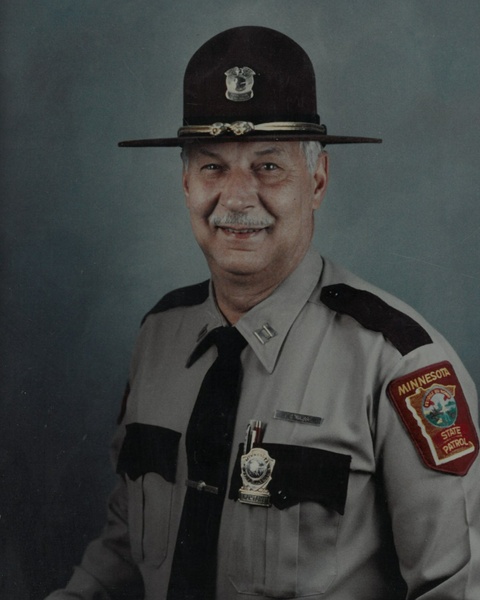 Tom was born in May, 1935 to Ernest and Opal (Boustad) Nuesse in Sacred Heart, Minnesota. He was raised with his eleven siblings in a small shack in Hawk Creek Township.

After graduating from Sacred Heart High School, he enlisted in the United States Marine Corps and served his country in the Korean conflict. He was honorably discharged as buck sergeant. When he returned home, he met Kaye Noble, the love of his life, on a blind date. They were married in January, 1960. As a young couple, they lived in Bayport while he was employed as a prison guard.

In 1961, he attended peace officer training in order to join the Minnesota State Patrol. Their growing family lived in homes in Bloomington, Arlington, Eagan, and Pillager while he was a State Trooper. He retired after twenty-five-plus years, last serving in the rank of Captain in the Brainerd area.

In retirement he tinkered around, and fished and hunted with family and friends. He and Kaye travelled in a fifth-wheel trailer for several winters before they settled in their winter home in Apache Junction, Arizona. While he was still able, he and Kaye took road trips on their Honda Gold Wing motorcycle. Along with family members, they even ventured to the Sturgis Rally in 2004.

During the summer months, they relaxed in their home near the Gull River in Pillager. They lived there year-round during the past few years.

Family and friends often gathered at the homestead property, the ‘Little Place’ in Sacred Heart, to camp out and enjoy recollecting stories of times past. It was his slice of heaven on earth.

We have great memories of hunting in the woods, and fishing with him. Some of his favorite foods to cook were potato balls, barbecued ribs, Philadelphia scrapple, fresh pan-fried fish, and homemade salsa that everyone enjoyed.

He especially cherished times with his grandchildren and great-grandchildren. Grandpa was always pulling their leg, and laughed at their jokes even if he heard them more than once. His legacy lives on.

Tom was the last surviving child of Ernest and Opal Nuesse. His brothers Ray, George, and Bob, and sisters Fern, Joyce, Ruby, Betty, Jean, Grace, Lu, and Marge and their spouses preceded him. Others include his father-in-law and mother-in-law, Frank and Ruth Noble, and in-laws Duane (Mary) Noble, Bud Shutter, Bill Wallbank, and Debbie Noble.

We are grateful for the kind care he received during his last days at Bethany Good Samaritan and St. Joseph’s Hospital in Brainerd. Tom's wish was to have no formal services, but for his ashes to be taken to the Little Place in Sacred Heart, where he was born. Family and friends will gather at a later date to share fond memories. May he rest in peace.

To order memorial trees or send flowers to the family in memory of Thomas Richard Nuesse, please visit our flower store.