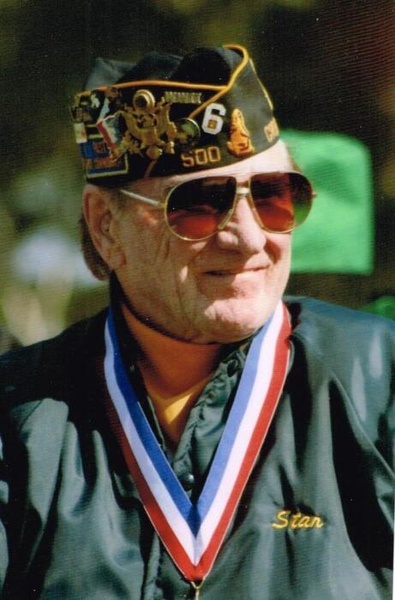 Stanley Lyle Blaisdell, 97, passed away on August 21, 2020 at the Harmony River Living Center in Hutchinson, Minnesota. Stanley was born on January 8, 1923 in Mankato, Minnesota to Alice and Samuel L. Blaisdell. He was raised on a farm south of Mankato and attended the Pemberton High School where he was involved in many of the school sports, excelling in basketball. As coach and captain of the team he took the team to the state tournament and also played against the Globe Trotters. He also played basketball for the Minnesota School of Business College.

After graduating, Stanley was inducted into the Army serving as Honor Guard in the 10th Mountain Division during World War II. After completing his service in the Army, he attended the Minnesota School of Business and went to work at the Boise-Cascade Lumber Co. corporate office. After spending some time at this job, he decided he would rather work outside than in an office. He learned the trade of carpentry and became an independent building contractor which he continued until his retirement.

Stanley was an avid hunter and outdoors man. He was known to be able to fix anything and was always helping someone with a problem. He enjoyed helping the boy scouts with their projects. He also enjoyed the study of history and could relate dates and events with ease.

On October 14, 1945, Stanley married the love of his life, Shirley Johnson of Minneapolis. They lived in Bloomington, Minnesota and raised their family. Stan and Shirley retired to their cabin on Wood Lake in Emily in 1982, was a member of Our Saviors Lutheran Church in Outing and later a member of Crosslake Lutheran in Crosslake. Stan was a charter member of the Crosslake-Fifty Lakes American Legion serving with the Color Guard for over 30 years. He was also a life member of the DAV.

An in car worship service will be held at 1:00 p.m., Saturday, September 19, 2020 at Crosslake Lutheran Church Outdoor Center, 14019 Daggett Pine Rd., Crosslake, MN. The committal service with Honor Guard, will follow the service at Pine Ridge Cemetery on Evergreen Dr. in Emily, MN.

To order memorial trees or send flowers to the family in memory of Stanley Blaisdell, please visit our flower store.