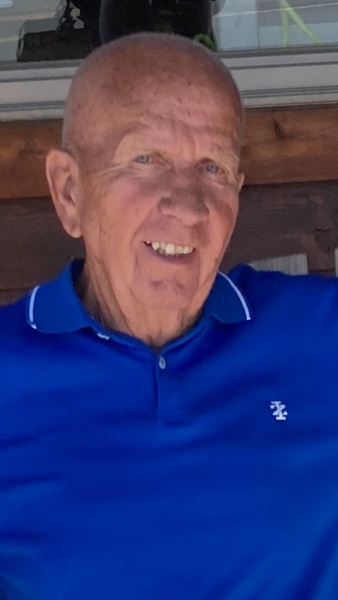 Russ was born on August 15, 1937 in Staples, Minnesota to Andrew and Mayme Schimpp. He grew up north of Staples, where he lived all but 12 years on the family farm. He graduated from Staples High School in 1955 and went on to attend the machinist program at Staples Vocational Technical School. Russ was married to Jackie Johnson on May 21, 1960 in Foley. They were happily married for 57 years until February 22, 2018 when Jackie went home to be with Jesus. Russ started working as a machinist in 1974 at 3M in Staples. Moving back to the family farm provided him the opportunity to enjoy his passion of the outdoors, farming the land, deer hunting, getting up wood and spending quiet time with God. After his retirement from 3M he found a new hobby in golf which lead him to research, design and build R & J Country Aire Golf Course, a nine hole golf course on his land. Most important to Russ was his strong faith in God. He was very active at Thomastown Covenant Church, teaching Sunday School, treasurer, deacon board and any area where he could show his love for Jesus. Perhaps he even asked you, "Do you know Jesus?". Russ is survived by his loving family which includes his daughters, Tammi Walz (Russ) of Staples, Terri Fix (Gordon) of Vining and Traci Cooper (Chad) of Baxter; eight grandchildren and six great-grandchildren; his siblings Byron (Mary) Schimpp of Ypsilanti, MI, sister-in-law Ardis Schimpp of Staples, Gary (Carmen) Schimpp of Staples, Judy (John) Todd of Eagen, Joyce Anderson of Isanti, Barb (Larry) Rach of Verndale, David (Jocelyn) Schimpp of Remer. Many nieces, nephews, cousins and extended family. He was preceded in death by loving wife, his parents, brother Donovan, brother-in-law Roger Anderson and niece Deb Bernstrom.

To order memorial trees or send flowers to the family in memory of Russell Schimpp, please visit our flower store.