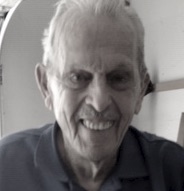 Robert James Munholand of Crosslake, Minnesota, died on Thursday, April 2, 2020, after a brief illness. Bob was born July 7, 1926 in Little Falls, Minnesota, to Ezra and Mary (Logan) Munholand.
He was preceded in death by his wife of 32 years Erna (Klosner), son James Thomas, brothers Harry and Eugene and sisters Lois Bishop and Martha Qualley.
He is survived by one brother, Eldon “Puz” Munholand of Fifty Lakes, Minnesota; one son Michael Munholand of Chippewa Falls, Wisconsin; step-son Calvin Johnson; several grandchildren; and many nieces and nephews. Bob grew up in rural McKinley Township on his parents’ farm. He attended Backus High School and would have graduated in 1944 but enlisted in the Navy and served in World War II aboard the USS Louisville. After being discharged from the Navy in 1946, Bob went back to school and graduated from Backus High School in 1947. In 1950 he moved to Minneapolis, married Margaret Anderson, and they had 2 sons. He worked for Thompson Lumber Company until 1990, when he retired and moved to Crosslake permanently.  In the meantime, he and Erna had married in 1983. Bob enjoyed camping, boating, and the north country. He and Erna resided for a time in Arizona, but eventually made their way back to home and family.
Interment will be at Fort Snelling at a future date to be determined.

To order memorial trees or send flowers to the family in memory of Robert Munholand, please visit our flower store.