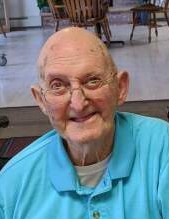 Robert Harding Blake, 89, Staples (formerly Motley), died Saturday, October 31st at his home in Staples, with his loving wife at his side.  A Private Family Service will be held, burial will be at the Motley City Cemetery at a later date.

Bob was born on February 8, 1931 in Wadena, son of Harding and Gladys (Marvin) Blake.  He was raised on the family farm in Cass County in rural Motley, graduating from Motley High School in 1949.  He served in the US Air Force from 1952 until retiring after twenty and a half years.  He was united in marriage with Junette Hagenson on May 1st of 1956 at Trinity Lutheran Church in Staples.  After moving back to Motley, he worked at Morey’s, was the afternoon manager at the El Ray Café and then worked full time with the US Postal Service in Brainerd, MN, retiring from the Post Office after twenty years of service in 2000.  Bob was a member of American Legion Post # 0124 since 1973, served on the Swan Valley Church Council and also served as an usher there.  He and Junette had been members of Faith Lutheran Church in Staples since 2002

Bob loved the outdoors, enjoyed gardening and dearly loved his family and his country.  Bob suffered a stroke in 2002 and enjoyed and loved his aphasia group in St. Cloud.

Bob is survived by his loving wife of 64 years: Junette; sons: Bruce, Gary (Kelly) and Kent (Mary); six grandchildren: Anthony (Holly), Andrea, Aslyn (Nick), Amara, Tina (Aaron), Ashley (Matt); twelve great-grandchildren; a brother: Charles; and many nieces and nephews.  He was preceded in death by his parents: Harding and Gladys Blake.  Arrangements have been entrusted to the Brenny Family Funeral Chapel of Staples, MN. www.brenny.com

To order memorial trees or send flowers to the family in memory of Robert Blake, please visit our flower store.