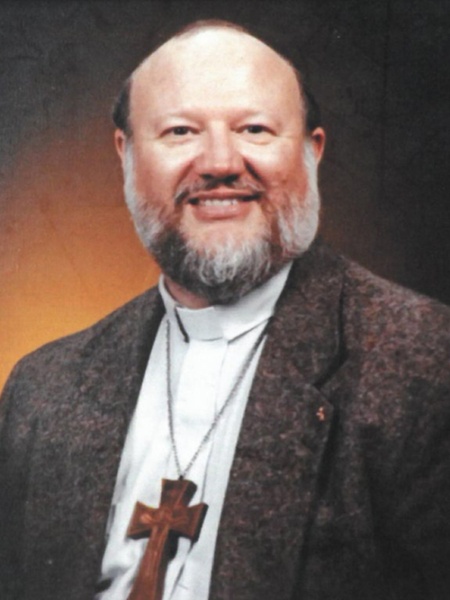 “I Want Jesus to Walk with Me” is the title of a song David came to love when he heard it performed by Grandson Philip Sargents’ A Capella group, Chamber Bravura.

David N. Stevens ended that Walk here on earth at home on June 12, 2020 with his wife Bonnie and daughter Joanna at his side. David was born in Valparaiso, Indiana, on May 19, 1949 to Warren and Althea Stevens. Early years were spent in Excelsior, Mankato and New Ulm, Minnesota. The family moved to California when he started high school and he graduated from Fremont High in Sunnyvale, California, in 1967. He received the Associate in Arts degree from St. John's College, Winfield, Kansas, in 1969; the Bachelor of Arts degree from Concordia Senior College in Ft. Wayne, Indiana, with a concentration in Psychology, in 1971; the Master of Divinity degree from Concordia Seminary in Exile, St. Louis, Missouri, in 1976. The Doctor of Ministry degree was earned from The Lutheran School of Theology in Chicago, Illinois, in 1987

Following retirement he served Maple Hill Lutheran Church, Pine River and Swan Valley Lutheran in Leader and from April up until his death, Lutheran Church of the Cross, Nisswa. David also served as a leader of Northern Lakes Vets & Friends Support Group.

David served as a Worker-Priest for 9 1/2 years while developing congregations at Thayer, Missouri, and Cherokee Village, Arkansas. During that time he worked in the newspaper business starting as a reporter and editor for the Tri-County Record in Salem, Missouri, and later becoming Managing Editor of the Cherokee Villager newspaper in Cherokee Village, Arkansas. He completed courses in Newspaper Design at the University Of Missouri School Of Journalism in Jefferson City, Missouri. During his newspaper career David received many awards in the Arkansas Press Association Contests for reporting and advertising design.

David had a lifelong love of fishing and the outdoors. After the early years of having to drive great distances to find lakes, he thoroughly enjoyed being in close proximity to so many of Minnesota Lakes and was able to fish on Round Lake where his grandfather’s cabin had been built.

David and his wife, Bonnie, were married in Milwaukee on July 11, 1971 and have two children: Joanna (Twig) Sargent and Michael Stevens. The four Sargent grandchildren are Luke, Philip, Lily and Lydia.

Memorials may be made to Lutheran Church of the Cross earmarked for Seminarian Debt Relief or the donor’s choice. A memorial service will be held later in August.

To order memorial trees or send flowers to the family in memory of Rev. Dr. David Stevens, please visit our flower store.