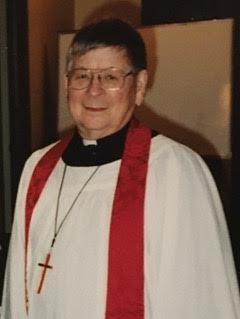 Pastor Orville Eugene Aho journeyed to his heavenly home to be with His Lord and Savior and beloved wife Signe on February 7, 2021.  Orville was born to Oscar and Alma (Rimpila) Aho in the Finnish farm community of Sebeka, MN August 11, 1925.  Pastor Aho was preceded in death by his wife of 73 years, Signe Frederiica Nikkari (July 17, 2020).  His parents, his sister, Norma Martini, and a sister and brother who died in infancy also preceded Orville in death.  Orville survived many life threatening health situations in the last three decades.  As he suffered the limitations of speech and song due to cancer, he continued to use his voice prosthesis to proclaim the Gospel message that marked his life.  With the assurance of eternity, he now freely “sings of His Savior’s love.”

Orville was ordained into the National Evangelical Lutheran Church in 1947.  Pastor Aho’s ministry included Finnish-speaking churches in Thunder Bay, Ontario, Virginia, MN, and Toronto, Ontario.  He also served as chaplain in nursing homes, a mental hospital, prisons and a state hospital.  He hosted a radio program in Finnish, “Tidings of Grace” and a closed circuit TV program.  In 1965 Orville moved to Buffalo, NY and served as chaplain for Lutheran Service Society.  He continued his education and was certified as a Marriage and Family Counselor.  He provided many workshops for pastors and volunteers working in adult living situations.  In 1978 Ahos returned to their home state of MN and Orville served as chaplain at Ah-Gwah-Ching, a state operated adult care facility in Walker, MN and continued to serve vacancy congregations in northern MN after his retirement in 1988.  Ahos moved to Baxter, MN in 1998.

Funeral services with required masks will be held at Prince of Peace Lutheran Church in Baxter, MN on Saturday, February 13 at 1 p.m. with visitation beginning at 12:15 p.m

In lieu of flowers, the family requests memorial gifts may be directed to the Concordia Theological Seminary Student Aid Fund, 6600 N. Clinton  St., Ft. Wayne, IN  46825

Funeral arrangements are being handled by Brenny Family Funeral Chapel in Baxter, MN

The family is deeply grateful for the loving care of both Orville and Signe by Northern Lakes Assisted Living, Heartland Hospice, Good Neighbor Home Care and Dr. Julie Olson.

You can view a live stream of the service by using the following link: https://youtu.be/tUxRT6dB9B0

To view the bulletin for Orville's funeral service click the following link: https://www.princeofpeacelutheran.church/orville-aho-funeral-bulletin

To order memorial trees or send flowers to the family in memory of Orville Aho, please visit our flower store.