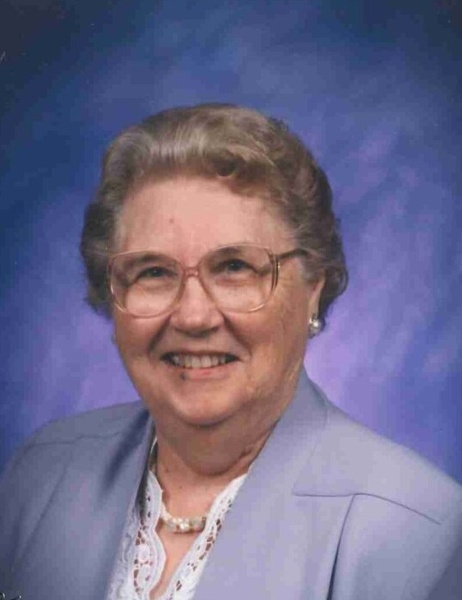 Margaret Louise Duebner, 100, of Red Wing, died Saturday, January 15, 2022 at Deer Crest Senior Living in Red Wing. She was born October 17, 1921 in Cass County to Otto and Anna Puttin. Her father come from Germany at age 12 and her mother’s parents were German immigrants. She was baptized on November 13, 1921. She had one sister, Lorraine Vater and one brother, Adrian Puttin.

She taught in Lutheran schools for 24 years, 16 of which were at Jerusalem Lutheran School in Milwaukee. Her constant caring with fairness encouraged learning. Most important to her was to share the love of her Lord, His forgiveness and the assurance of heaven. She was asked to be a supervisor at DMLC’s practice teaching school but had to decline. While in Milwaukee, she worked with a WELS publishing committee, creating the activity sheets for a new Sunday School series for Northwestern Publishing House.

Later, for five years, she did aide work in the Resource Center in the Senior High in Brainerd, Minn. and Pequot Lakes Elementary, while she cared for her parents.

In 1973, she married Gustav Hein and lived in Oregon City, OR. until his death in 1987. During this time Gus’ sibling gave her much needed support both before and after his death. In 1991, she moved to Rochester, Minn. and was a member of Resurrection Lutheran Church. While here, Gus’ sister Mildred and husband Ron Kuschel gave her much support. In 1994, she married Alton Duebner, a college classmate from DMLC, and moved to Manitowoc, Wis. While there she was a member of First German Lutheran Church where she volunteered with the OWLS. She enjoyed making banners for the OWLS and correcting tests for the prison ministry. Alton passed away in 2019. She moved to Red Wing to be nearer to her niece, Judy Vieths and resided at Deer Crest Senior Living Community. At the time of her death, she was a member of St. John’s Lutheran Church in Red Wing.

Margaret was blessed with many talents. She sang in choirs, at funerals and weddings. Her artistic talents were displayed in floral work, needle work and painting; oils, China painting and watercolor. She enjoyed being a member of the Sr. Citizens Watercolor Club and the White Trail HCE.

She is preceded in death by her husbands, Gustav Hein and Alton Duebner; siblings, Lorraine Vater and Adrian Puttin; and her parents.

To order memorial trees or send flowers to the family in memory of Margaret Duebner, please visit our flower store.