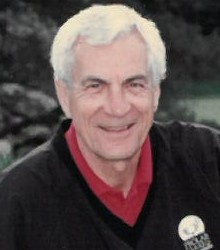 L.J.  “Pat” Miller went to be with the Lord on Saturday, December 25th, 2021. He was at the Care Center in Staples, Minnesota.  Pat was 92 years old. Pat was born in Crookston, MN on June 17, 1929. He was the son of N.A. “Sam” Miller and Pearl Miller. The family moved to Staples in the summer of 1939, and he took part in the 50th Anniversary of Staples. Pat started school that fall and graduated in 1947. During the WWII years he worked on the NPRR as a crew caller and on the section crew in the Staples yard. After graduating he got a job on the RR as a fireman and five years later, he was promoted to engineer. He married Donna Greeno in the Staples Methodist Church on July 17, 1948. They had three children: Kenneth, Douglas, and Jon. In 1964 Pat opened “Pat Miller Photographics” specializing in general photographic work and photographic restoration. In 1972 Pat was offered a teaching position with the Staples Vocational School Photographic Department. Pat took advantage of the college courses that were offered evenings and, in the summer, and in 1978 Pat received a BS degree, Summa Cum Laude. In 1980 he received a Master of Science degree from Bemidji State University. The program was recognized throughout the industry as a source of well -trained individuals that were hired in manufacturing plants, photo labs and studios in the state. Pat retired in 1994 as chairman of the media department. Pat and Donna loved to travel trips to Europe, Hawaii, Mexico and around the U.S. He was an avid golfer participating in many tournaments. Pat loved his Harley motorcycle making many trips to the Black Hills.  He touched people’s lives through is photography which included weddings, graduations, family photos and outdoor scenes. Pat was an active member of the United Methodist Church in Staples serving on many committees and teaching Sunday School. Pat is preceded in death by his parents Sam and Pearl Miller, and son Douglas Miller, brother Glenn Miller and sister Beverly Hill. He is survived by his wife, Donna Miller, of 73 wonderful years, Sons Kenneth (Kathleen) Miller and Jon Miller, and grandchildren, Michael (Marissa) Miller and Lindsey Miller, Great grandchildren Taylonee, Kendrick, Jaylen, Theo, Gus, and Luna. A celebration of Pat’s life will be held in the spring of 2022. Arrangements are with Brenny Funeral Home of Staples, Minnesota. In lieu of flowers donations may be made to CLC (Central Lakes College and Staples Community Center) in Pat’s memory.

To order memorial trees or send flowers to the family in memory of Leonard "Pat" Miller, please visit our flower store.