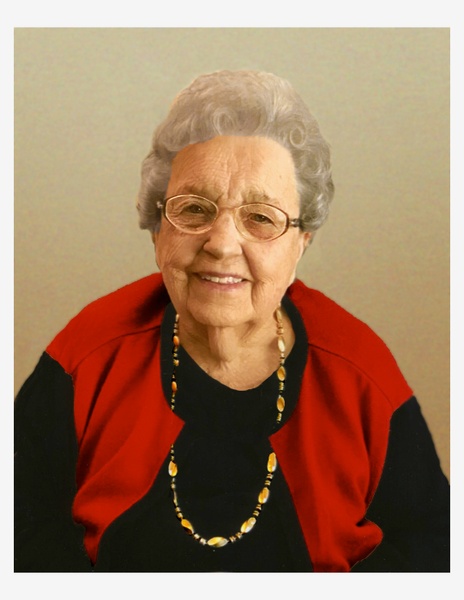 Juanita Mae (Coleman) Miller, age 95, Staples, died February 15, 2022 at the Lakewood Health System Care Center in Staples. A Memorial Service will be held on Saturday March 26th at 11:00 am at Faith Lutheran Church in Staples. Visitation begins one hour prior.

Juanita was born to John and Alma (Overby) Coleman on April 1, 1926 in Staples, MN. She was in part raised by her grandparents Jesse and Nettie (Ruch) Coleman. Juanita graduated from Staples High School in 1944. During high school she worked at the local Coast to Coast Hardware Store in Staples. After graduation Juanita worked as a “Rosie the Rivetter” during WWII at Chargale defense plant in St. Cloud, MN.

Juanita married Derald Miller on August 31, 1946. They were married for 62 years. Juanita considered herself a “city girl” but moved to the country upon marrying “country boy” Derald. Their farm was south of Staples. Together they operated the Southside Mini Mart, and owned Miller Gulf Store later called Staples Self Serve and Miller True Value.

To order memorial trees or send flowers to the family in memory of Juanita Miller, please visit our flower store.