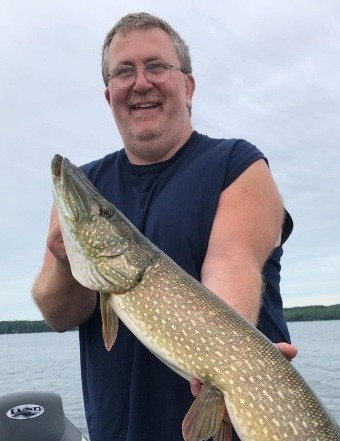 Jack Dailey, age 55, passed away on February 20th, 2022. A visitation will be 5pm-8pm on Friday February 25th at the Brenny Family Funeral Chapel in Staples. Funeral services will be 2pm on Saturday February 26th at Motley Free Church in Motley, with a visitation one hour prior to services.  Lunch will be served after the funeral service.

Jack Kevin Dailey was born on July 5, 1966, to Laurence and Josephine (Siss) Dailey. He was the youngest of 13 children.  Jack graduated from Staples High School in 1984 and finished his 2 year machinist degree at Staples Technical College.  He was employed as a machinist first with Tol-O-Matic in Minneapolis and later with Mate Precision Tooling in Anoka until his death.  Jack lived in Anoka, Elk River, Big Lake and most recently Becker.  Jack also owned a cabin just steps away from his childhood home near Leader and spent many weekends there.

Jack enjoyed being outdoors. He loved hunting and fishing. He was a hard worker and enjoyed a good beer. Above all else he loved his family, watching his boys wrestle, and especially enjoyed time with his granddaughter “Punky”.

To order memorial trees or send flowers to the family in memory of Jack Dailey, please visit our flower store.