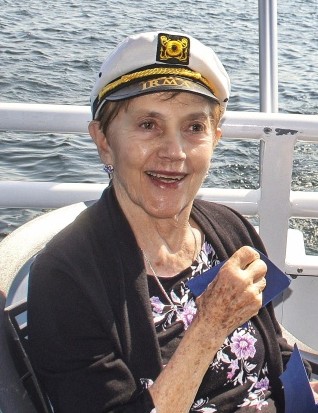 Irma passed away peacefully in her home with Dutch by her side on Monday, January 10, 2022.

Irma was born September 1,1934, in Powell River, British Columbia, Canada.  She was the daughter of Angelo and Elena Culos who both immigrated from Italy.  She was her high school’s student body President and after graduation went on to attend nursing school on a scholarship at St. Paul Hospital in Vancouver.

She then worked as a Registered Nurse in Powell River before venturing out to see more of the World.  She visited San Francisco and moved there and worked at three different hospitals over five years. Which is when she met Dutch Cragun at a dance.  Irma continued to travel the world in addition to working and dating Dutch Cragun.  The couple married in 1965.  Irma worked at St. Joseph Medical Center before devoting herself fulltime to Cragun’s - a family resort owned by Dutch’s parents at the time.

She was named Secretary/Treasurer of Cragun’s long before she and Dutch owned the property outright.  Irma was instrumental in the expansion of the resort- What began as a 12 cabin, ten room resort has grown to encompass nearly a mile of Gull Lake Shoreline with over 200 hotel rooms, 69 cabins on Gull Lake with a 54-Hole Course just down the road with a beautiful club house.  The resort is now the largest, all-season resort in Minnesota, and she oversaw everything for many years- From the grounds, the food and beverage, the books, etc...  When she retired it took four people to replace her.

She also designed and built their new home in 2016 and she liked to tease Dutch – that he could live there, as long as his rent was on time.  The home is across the lake from the resort and Irma and Dutch often looked out with pride at what they built, the family they created with guest and employees over the years, and the memories they have helped thousands of families create.

Irma’s Schedule was demanding but she also made sure to have fun.  Irma and Dutch were members of the 52somes, a dance cub in the Brainerd Area.  She also established the Heartland Symphony Orchestra Ladies Auxiliary.  She arranged the first outdoor art show at Cragun’s, which evolved into the “Arts in the park”.  She enjoyed gardening, rock collecting and geography.

Along with Dutch, she was on the Board of Directors for Ski Gull for years and credited for helping keep it operating.  Due to her organized and giving nature she contributed to over 35 charities on a regular basis.  She was recognized for her accomplishments when she appeared on the original cover of Her Voice magazine and also later received the 2019 Award in Philanthropy from the Brainerd Lakes Area Community Foundation.

She is survived by her husband Merrill (Dutch) Cragun, her brothers, Kenneth Culos and Wayne Culos of Powell River; and her many nieces and nephews.  She was proceeded in death by her parents, sister Lucy and brother Anthony.

Rooms are available at Cragun’s Resort for overnight guest and the service will be live streamed.

In Lieu of flowers donations are preferred to Minnesota Teen Challenge or the Lakes Prostate Cancer Fund.

To order memorial trees or send flowers to the family in memory of Irma Cragun, please visit our flower store.