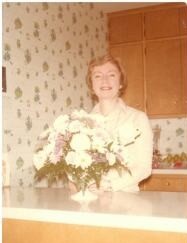 She was born on October 18, 1928, in New Rochelle, NY, to Robert Browne and Helene Michelson Browne.  Janet was an only child.  Approximately one year after she was born, the stock market crashed, her father lost his job, and they moved to the Bronx.  She graduated from Hunter College in 1949.  The next year, she earned her Master's degree in History from New York University.

Janet married Alfred August Beltran on June 9, 1950, in New York, where they continued to reside.  In 1959, they moved their growing family to Santa Clara, California, and in later, in 1962, moving further south to Los Angeles, California.  She and her children were featured in the San Fernando Valley News on February 14, 1971, concerning the return to the family home in Los Angeles, following the 1971 earthquake.  She had 11 children.  In 1972, the family moved to Williston, North Dakota, and then, in 1973, to Bismarck, ND.

Soon after their arrival in Bismarck, Janet began teaching at what was then Mary College (currently, University of Mary) in 1974 in the Social and Behavioral Sciences Department.  Later, she worked with Doug Parks an others, developing curriculum for college level Indian Studies programs and language retention programs.  They recorded and transcribed native American stories, as told by the Arikara Native Americans who reside at Fort Berthold Reservation in North Dakota in the Arikara, Mandan and Hidatsa languages, and published those stories.  She co-authored with Doug Parks, the two volume book An Introduction to the Pawnee Language.  Additional books included An introduction to the Arikara language = Sa´hnis? wakuu´nu' and Arikara teacher's guide, among others.  They also compiled books of stories, including Coyote Chief and the two blind men, and Old man coyote races buffalo: a traditional Mandan tale.

After her retirement in 1995, she became Professor Emerita, in the Department of Social & Behavioral Sciences, and began working at the North Dakota State Historical Society, curating archival papers.  She was an Annual Volunteer Award recipient in 1998 and 2005.  She was known worldwide on the internet, in genealogical circles, for her curating work, because the papers concerned immigrants from all over the world who had moved to the North Dakota territory, providing valuable information for people learning about their family history.

In 2019, she was interviewed in a video on KX News, North Dakota on Martin Luther King Day.  She resided in Bismarck until December 2020, when she moved to Brainerd, Minnesota, to live near her son Robert and his family.

She was preceded in death by her husband, Alfred, who died at 93 years of age on December 26, 2014, her sons Michael and Lawrence, and Margaret Mary, who was still-born in 1965.

Janet is survived by her children Chris, Madeleine, Anthony, Thomas, Mary Grace, Karen, Theresa, and Robert, 18 grandchildren, and 11 great-grandchildren.  Services will be held at Brenny Family Funeral Chapel, Brainerd, MN, on Monday June 12, 2021 with a visitation at 10:00am with funeral service at 11:00 a.m.

To order memorial trees or send flowers to the family in memory of Helen "Janet" Beltran, please visit our flower store.