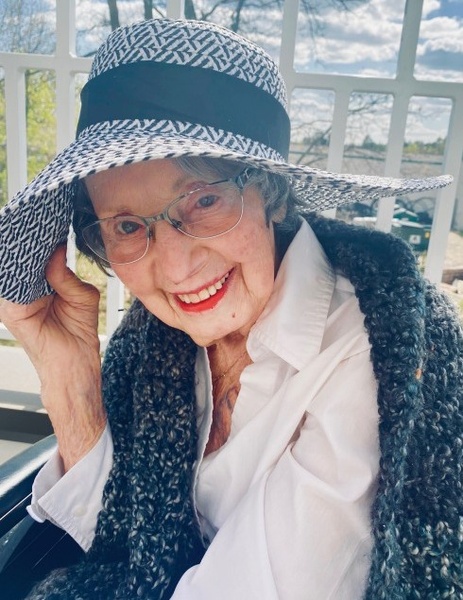 Helen Lucile McConville, 95, of Crosslake, passed away on August 08, 2021. Mass of Christian burial will take place at 11:00 AM at St. Emily’s Catholic Church in Emily, Minnesota. A visitation will take place one hour prior to services. Interment will be at Pine Ridge Cemetery in Emily, MN.

Helen was born on November 12, 1925 on a prairie farm near LaMoure, North Dakota, to Paul and Mary (Lanham) Hoffman. She graduated from LaMoure High School in 1943 with honors. During WWII she was a Red Cross Volunteer as a Nurse Assistant. After high school, she went to work at Jamestown Lumber Yard as bookkeeper and was soon promoted to purchasing manager. Then, on April 13, 1947, she was united in marriage to James L. McConville. They lived in Fargo, ND until 1968 when they moved to Detroit Lakes, MN where Helen lived until 2019.  Helen had many jobs throughout the years. She worked at Midland Hospital Supply as an Office Manager and became a minority partner. In 1956, she sold her shares and spent a year as a domestic engineer. In 1957, Helen partnered with her husband in opening a water softener sales business. In 1958, she was employed as Purchasing Manager at St. John’s Hospital. She managed a department of three employees and was involved in a building expansion. She resigned from St. John’s Hospital in 1978 and graduated from NDSU with honors in 1979 with a Bachelor of Science degree in Business. Helen and Jim owned the Secretary Shop for 15 years. She then worked in a partnership in the barter exchange business with her son Paul McConville for 10 years before retiring in 1990. After retirement Helen completed her LPN degree in 1994 and was employed with Hospice of the Red River Valley until 1998. She loved to sing, dance, cook and bake, play cards, flower gardening, and read the newspapers. Helen was active in Zonta International, NAWBO, and Catholic Daughters of America. She will be deeply missed by all who knew her.

She is survived by her son Paul and daughter-in-law Colette (Outing, MN); grandson Broc (Kacie) McConville, and two great-grandchildren Blayke and Declan (Blaine, MN); sister Dorie Baer (Omaha, NE); and 16 nephews and nieces. Helen was preceded in death by her husband James McConville; her parents; and her siblings Margaret Frost and Charles Hoffman.

Memorials can be made to Angel Flight Central, Inc. with offices in Kansas City, MO, or to Adrenal Center, Department of Medicine, Columbia University of New York, New York.

To order memorial trees or send flowers to the family in memory of Helen McConville, please visit our flower store.