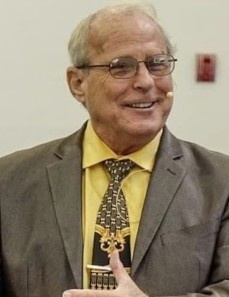 Gaylan Dean Pegel, Sr., retired Lieutenant Colonel of the United States Army, was called home to be with the Lord on July 13, 2021 while at the Naval Medical Center in San Diego, California. He was surrounded by family as he entered eternal life.

Gaylan was born on May 4, 1949 at St. Luke’s Hospital in Duluth, Minnesota. Gaylan grew up and was educated in the Brainerd, Minnesota area. He also attended and graduated from Maplewood Academy (Hutchinson, Minnesota), Class of 1967. Gaylan then enlisted in The United States Army and studied Medicine at Fort Sam Houston, Texas. Following training, he served two tours of duty in the Vietnam War.

Gaylan served as a medic on the front lines, was shot in the shoulder, and was critically wounded. Gaylan continued to rescue fellow soldiers ignoring his own injuries until everyone was safe and that battle was over. This gallant effort earned Gaylan the Silver Star Award (3rd Highest in the Military) and his first Purple Heart. After healing from this wound, Gaylan volunteered for a second tour and was once again seriously wounded, earning a second purple heart. Gaylan also received 12 additional honorable medals for his work with the United States Army, including the Legion of Merit and 2 Meritorious Service medals. He earned his 4-year degree in Psychology from St. Cloud State and graduated Officer Candidate School shortly after. Gaylan went on to complete 38 years of military service including several years working at The Pentagon in Washington, D.C., narrowly surviving 9/11. After proudly serving his country, Gaylan retired while stationed at Fort Sam Houston, the very place where his military career began.

Gaylan retired as a Lieutenant Colonel in the United States Army and eventually returned to his home state where he resided in Crosslake, Minnesota. He loved creating many memorable moments with his children, family and friends through his love of year-round fishing, family reunions, boating, hiking, and reminiscing about times gone by. Gaylan “Pops” enjoyed the strength and serenity he received from cutting & splitting wood, feeling like a lumberjack in his favorite plaid shirt. Pops was well known for his ability to make people laugh, even in the hardest of times or the best of times Pops could lighten or enlighten the mood of all those around him.

Gaylan’s biggest passion of all was to spread the Word of God, which he did with nearly everyone he met. Most every Saturday, traveling far and wide, Gaylan was preaching the Word of God. Furthermore, he would never pass up an opportunity to give or receive a hug. He clearly communicated that just one hug could positively change one’s entire day.

Gaylan never saw bloodline or namesake as the distinction of “family.” Many refer to him as Dad, Grandpa and Great-Grandpa simply because he took them in as his own. He was famous for his late-night chats and sharing of thoughts, passing on learnings and supporting those most in need, primarily sharing the Word of God. Many will remember & cherish his wisdom. Gaylan made a large impact on this world and will be dearly missed. He was more than prepared to meet his Lord and Savior when it was his time.

Gaylan’s Celebration of Life Service will be held on Friday July 23, 2021 at the Brenny Family Funeral Chapel, 7348 Excelsior Rd, Baxter MN 56425. The Viewing will begin at 9:00am – 11:00am, followed by his Service at 11:11am. The Graveside Service will immediately follow at the Baxter City Cemetery, Maplewood Drive, Baxter. Military Honors, including a Blackhawk Helicopter Flyover and 21 Gun Salute, will take place during this final service. Gaylan’s Family invites all guests to return to Brenny so we may enjoy a meal and fellowship to reflect on our memories and stories of our beloved Father “Pops”, Grandfather and Great-Grandfather.

To order memorial trees or send flowers to the family in memory of Gaylan Pegel Sr., please visit our flower store.