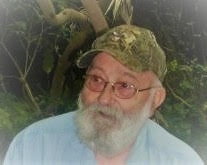 Fred was born to Ernest & Iva (Miles) Hahnert on May 9, 1933 at home in Little Pine Township. He helped his parents on the farm and was also a school bus driver. He was drafted into the army and served his country from 1953-1955.  He married Barbara Stevens in July of 1957. To this union, 4 children were born: Michael, Debra, Tamara and, Melissa. They later divorced.  He met his current wife, Tammy (Hoskins) and they were married in June 1982. To this union, 2 children were born: Susan and Fredrick Jr.

He worked many jobs throughout his life. He was a trucker, worked in the mines, and retired with 28 years of service from Potlatch. He was a coach and umpire for women’s slow pitch softball, former member of Merrifield Marathons and a member of the American Legions.

He sawed lumber on his sawmill for family and friends, butchered and processed deer every fall for family and friends. He loved riding his motorcycle, deer hunting, and sharing stories with his friends and family. He had a great sense of humor and always willing to lend a hand to anyone. He will greatly be missed by all who knew him.

To order memorial trees or send flowers to the family in memory of Fredrick Hahnert Sr., please visit our flower store.