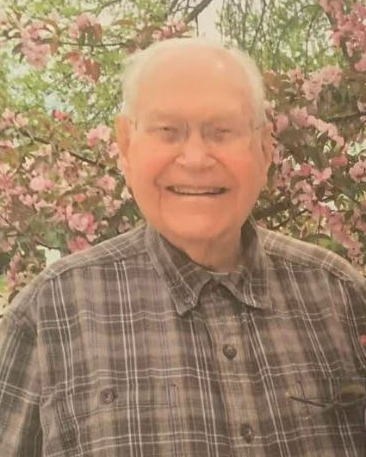 Eugene Floistad, 93, of Staples, passed away surrounded by his family on October 28, 2022, and is now rejoicing in heaven. Services will be at 11:00 AM on Wednesday, November 2nd at Faith Lutheran Church in Staples. Visitation will begin at 9:30 AM. Interment will follow at Evergreen Hill Cemetery.

Eugene was born on May 15, 1929, to Harvey and Ella (Hiller) Floistad in Nelsonville, Wisconsin. He married Iris Lorentz on December 17, 1955. Gene was a pastor serving Lutheran Congregations for 59 years. He sang with a few choral groups including The Milwaukee A Cappella Choristers, The Wahpeton N.D. Alphaen Male Chorus, and The Staples Area Men’s Chorus. He served on several boards and committees; The ALC Northern Minnesota District Council and its Executive Committee, the National Committees of Worship and Stewardship, The Office of Communication and Mission Support, Bible Camp Boards, Lutheran Social Service of Minnesota, The Breckenridge Minnesota Housing Authority, The Breckenridge Board of Compassionate Friends,  The Breckenridge Rotary Club, The Staples Zoning Commission, and The Staples Historical Society. He dedicated his life to serving others.

Eugene enjoyed woodworking, listening to chapel music, playing games late into the night, and spending time with his family and friends. He was a true Twins fan. As a native Wisconsinite, he enjoyed watching the Packers. However,  if they were playing the Vikings, the Vikings ruled. He will be missed by all who knew him.

Eugene is survived by his loving wife, Iris; children, Linda (Craig), Laura (Colleen), and John (Terri); six grandchildren; and eleven great-grandchildren. He is proceeded in death by his parents; son, David; and sister Dorothy Benson.

Arrangements are entrusted to the Brenny Family Funeral Chapel, Staples.

To order memorial trees or send flowers to the family in memory of Eugene Floisted, please visit our flower store.