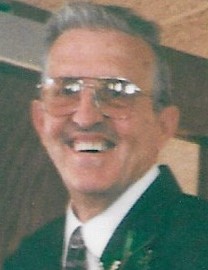 Eldon “Puz” Munholand, 92, of White Bear Lake and formerly of Crosslake, passed away on Friday, October 1, 2021, at home surrounded by his family.

Funeral services will be at 1:00 PM on Monday, October 18, 2021, at Crosslake Lutheran Church in Crosslake, MN. A visitation will take place one hour prior to the services. Interment will be at the Norwood Cemetery in Jenkins, MN.

Eldon was born on February 13, 1929, to Ezra and Mary (Logan) Munholand in Royalton, MN. He grew up in rural McKinley Township and after graduating from Backus High School, Eldon joined the US Navy. He served on the aircraft carrier “Princeton”, and was honorably discharged in 1950. He was married to Shirley Travis on August 28, 1948, in Walker, MN and together they had four children. They lived in Mounds View, and Eldon worked as a truck driver for many years with Thompson Lumber Company. Following retirement, they moved to the Crosslake area. Shirley passed away in 2004 after battling ovarian cancer. Eldon was remarried on October 14, 2006 to Jolene Kellar. Prior to COVID, Eldon had been in a card club in Fifty Lakes and was active in his church until his move to White Bear Lake. He also loved traveling (road trips were his favorite), woodworking, genealogy, camping, fishing, and hunting. Relationships were important to Puz and he always let those closest to him know how much they were loved. He devoted his life to his family and friends. His passing leaves a large hole.

Puz specifically requested that in lieu of flowers, gifts be given to Minnesota Ovarian Cancer Alliance (MOCA) or to Camp Knutsen in Crosslake, MN.

To order memorial trees or send flowers to the family in memory of Eldon Munholand, please visit our flower store.