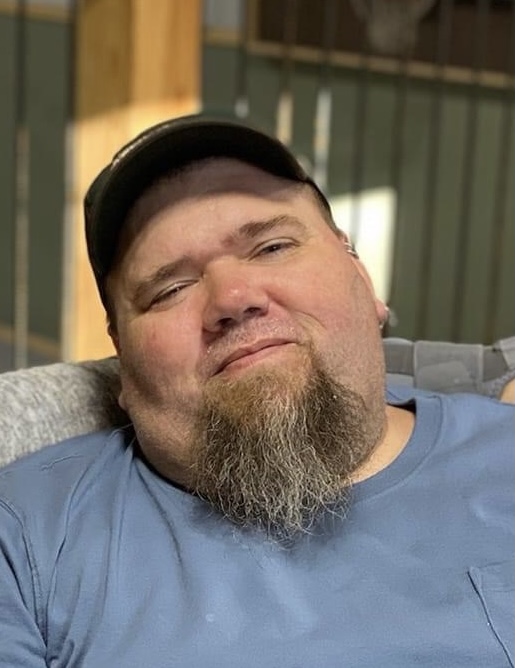 Edward Steven “Buddy” Kjeldergaard, 47 year old resident of Randall, MN took his final breath on Tuesday, October 19, 2021 at the Sanford Hospital in Fargo, ND. His family is planning a Celebration of Life at the Randall  VFW in the Spring of 2022. He will be cremated and laid to rest at the Minnesota State Veterans Cemetery, Little Falls, MN.

Buddy Kjeldergaard was born December 1, 1973 to Walton Kjeldergaard and Dawn Norton. He grew up in Randall playing sports, working his way up to an Eagle Scout, and using his smile to charm his way out of mischief. Buddy graduated high school with the LFCHS Class of 1992. After graduation, he joined the US Navy becoming an Electronics Technician Third Class spending time in San Diego, Guam, Singapore, and other destinations across the Pacific Ocean aboard the USNS San Jose. Following his return to Randall to determine his next adventures, he started receiving snail mail from a girl who had a crush on him in high school. Mail correspondence led to Buddy marrying Tracy Holtz on February 14, 1997 in Frankfort, KY.  Just before Kaleb’s 8th birthday the family moved back to Randall in August 2005. Later, Kelden and Maija joined their big brother to grow up in the same community that Buddy revered.

Buddy’s passions were his family and building Kj’s Express Inc. with his father and brother to pass down to his kids. He was not afraid of hard work, long hours, helping others, or getting his hands dirty,  just his wife or GPS when they got upset with him. Anyone who knew Buddy was touched by his kindness, generosity, humor, and mild temperament. He was truly one of the kindest people you could meet.

He will be missed by many but especially those he worked hard to come home to, his wife, Tracy, sons Kaleb (24) and Kelden (11), and his princess Maija (8). His voice will also be missed over the CB by his father, Walton Kjeldergaard, of Cushing, MN, and brother, Albert “Bucky” (Tina) Kjeldergaard, of Randall, MN, and their children Alyssa, Megan (Connor), Brooklyn, and Ethan. His laughter will be missed by his mother, Dawn (Dan) Norton, of Wenatchee, WA. His wise cracks will be missed by his in-laws, Mike & Sue Holtz, of Little Falls, MN, Paul & Jenny Holtz, of Albany, MN, and Shannon & Jesse Sanders of Randall, MN. His tickles and teasing will be missed by his nieces Abby, Kadence, and Sadiee as well as his nephew Dyllan. Buddy’s many aunts, uncles, cousins, godson Zeb, and extended family members will now be able to freely share stories of his shenanigans that he can no longer be held accountable for with his family. Buddy will be deeply missed by so many people beyond his family tree and into the community.

To order memorial trees or send flowers to the family in memory of Edward Kjeldergaard, please visit our flower store.