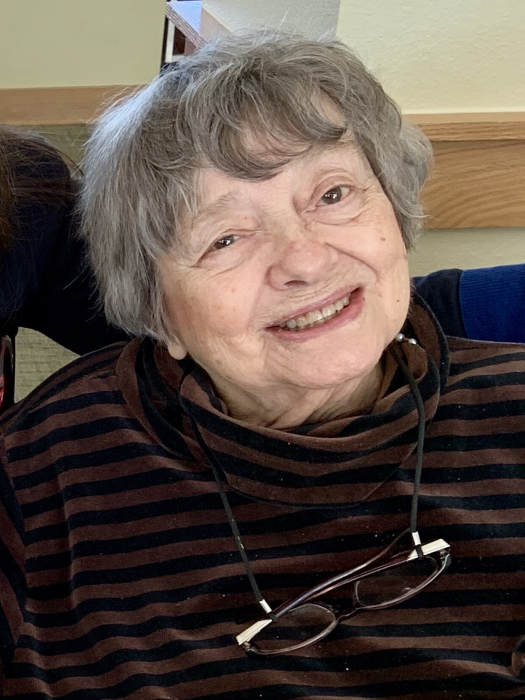 Mrs. Stevenson was born in Blockton, Iowa on January 4, 1928. She graduated from Blockton High School in 1945, and married James R. Stevenson on October 4, 1947. They lived in Des Moines, Iowa, where they raised two children. Mrs. Stevenson and her husband purchased a lakeside vacation cabin in Crosslake, Minn. in 1978, eventually moving up north full time in 1986.

Mrs. Stevenson was an accomplished cook and the consummate hostess. Family members and other guests in her home were always treated to delicious breakfasts each morning, evening hors d’oeuvres, and one-of-a-kind meals nightly during their stay. Together, she and her husband created a beautifully furnished and decorated home. She had a story for how they acquired every possession, and why it became a part of their home. Mrs. Stevenson showed great business acumen, handling all the household finances and investments, and working as business manager/accountant for her husband’s commercial art studio.  She loved music – especially classical, hymns, Blossom Dearie, ABBA, and Barry Manilow – and knew just about every lyric to her favorites. Rarely an hour passed by that she didn’t spontaneously burst into song while going about her day.

Mrs. Stevenson leaves behind many family members who each had their own unique relationship with this incredibly special lady. She and her husband, Jim, who passed away in January 2011, are now reunited in the glorious kingdom of Heaven.

Mrs. Stevenson is survived by two children, Jim (Barbara) Stevenson of Liberty, Mo., and Claudia Stevenson of Des Moines, Iowa.  She was affectionately known as “Bama” by her four grandchildren and six great-grandchildren.

To order memorial trees or send flowers to the family in memory of Doris Stevenson, please visit our flower store.