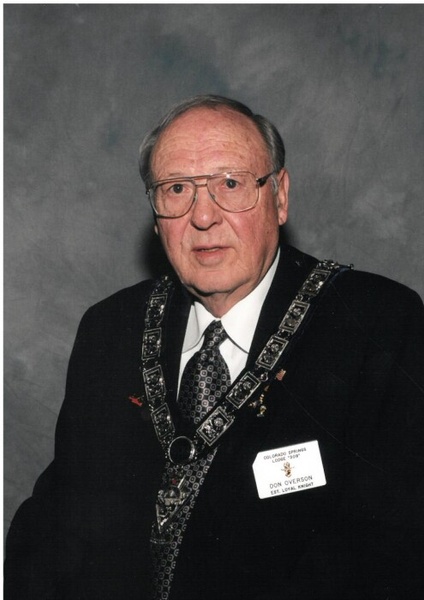 Donald Eugene Overson, 90, of Merrifield, MN, passed away peacefully at his home on Monday, November 15, 2021. Services will be held at the Colorado Springs Elks Lodge #309, in Colorado Springs, CO on January 13th, 2022 at 2:00 pm. Military Interment will be in Williston, ND in the Spring.

Don was born on July 13th, 1931, to Albert Edmundson and Sophie Lassey in Wolf Pointe, MT. He grew up in the Fairview, MT area and graduated from Sidney High School in 1949. Don enlisted in the United States Air Force where he served as a Flight Engineer for 4 years. After Don was honorably discharged, he married Rosemary Sadak and was employed in the automobile business in Springfield, MA. Upon relocating to Williston, ND, he worked as a steel building salesman and owner of Bison Steel Builders. He married Phyllis Dale on December 28, 1973. They moved to Colorado Springs, CO in 1987. He owned Front Range Steel Builders for 20+ years. Don and Phyllis enjoyed riding their motorcycle, touring in their motor home with their jet skis, and going to dances and movies with friends. Don enjoyed playing pool, pinochle, and poker, but most importantly spending time with his family and friends. He was a member of the American Legion, Williston Cowboys Drum and Bugle Corps and the Elks Lodge in Williston, ND, and a life member of the Elks Lodge in Colorado Springs #309.

Don was a vibrant, loving man and will be greatly missed. Arrangements have been entrusted to the Brenny Family Funeral Chapel, Crosslake, MN.

To order memorial trees or send flowers to the family in memory of Donald Overson, please visit our flower store.