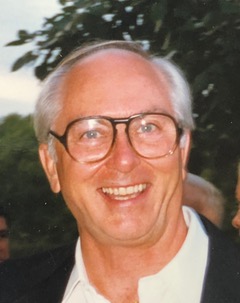 David (Dave) Reed, Fargo, North Dakota, formerly of Brainerd, Minnesota, passed away Wednesday, November 24, 2021, at Touchmark at Harwood Groves in Fargo, North Dakota. A memorial service will be held on April 22, 2022 at the Brenny Family Funeral Chapel in Baxter. There will be a visitation from 2:00 - 4:00pm, and a celebration of life service beginning at 4:00pm.

Dave was born in Hannibal, Missouri on June 10, 1929, to Cortes F. and Erma R. Reed, (Jenks). He went to school at Anoka where he graduated in 1947. He started working for the City of Anoka at the swimming beach on the Mississippi River working summers as a lifeguard. He continued this job while attending the University of Minnesota. 1950 found the Korean war and Dave in the Army. While in the Army, he married his high school sweetheart Mary Jo and their one child Kathy, (Kate), was born at Fort Sill, Oklahoma. He spent 15 months in the Korean War and then took his family for an 18 month stay in occupied Germany. In 1956 he got out of the active army and returned to the University of Minnesota where his schooling continued, and he graduated in 1959 with a 5-year degree of Civil Engineering. He then worked for the city of Anoka, again, but this time in the Engineering Department when the highway bypass was constructed through the north side of town. In 1964, he moved his family to Brainerd where Dave became the City Engineer. Mary Jo went back to work at Ma Bell and Kathy (Kate) finished high school. In 1973, Dave moved his office two blocks down the street and took over the District State Aide Highway Engineer job at the Minnesota Highway Department after the retirement of Ralph Larson. There he stayed until his retirement. Dave was involved with many organizations and groups throughout his career. He was President for the City Engineer’s Association, Minnesota Society of Professional Engineers,(MSPE) and was selected Engineer of the Year in 1988 by MSPE. He was also Past President of the Brainerd Rotary Club and was a Paul Harris Fellow. He was involved with the YMCA and was also a past president of the YMCA board. He was a member of the Gull Lake yacht Club, past Commodore, and the Treasurer for many years. He also was instrumental in organizing the Gull Lake Sailing School. He was a member of the Elks Club, was also a Shriner and Mason. During his last years in the Army Reserve, he recruited students for the United States Military Academy at West Point, assisting with advising and screening applicants He retired from the Army Reserve with credited service of 39 years, 2 months as a Lieutenant Colonel. Dave also loved to sail whether chartering a sailboat with friends on Lake Superior or the Caribbean, or his very own Class C sailing boat. He raced many races at the Gull Lake Yacht Club’s regattas. He also was a fine woodworker and made and designed many household items including his cherrywood bar in their home. He could also fix just about anything and loved tools of any and every kind! He and his wife, Mary Jo, enjoyed traveling extensively in their motorhome from coast to coast researching family genealogy and visiting with many families and friends. He loved being outdoors and was a conservationist before it was fashionable. He knew his trees, plants and rocks and minerals and was a virtual walking encyclopedia on such things. He is survived by his daughter Kate (Jack) Schmalenberg, two grandsons, Jonathan, and Jared Rardin, and one great grandson Michael.

To order memorial trees or send flowers to the family in memory of David Reed, please visit our flower store.