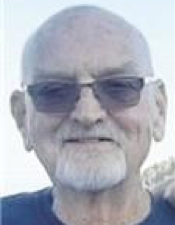 Daniel Carl Weaver, age 73, of Kingman, Ariz., passed away peacefully at the KRMC Joan and Diana Hospice Home on Wednesday, October 28, 2020. He succumbed quickly to cancer after a recent diagnosis just two days prior. He was born on September 29, 1947 in Lansing, Michigan.

On December 1, 1988, Daniel married Patricia in Grand Blanc, Mich. and they spent 32 years together. He was a Sergeant in the Marine Corp. and a Veteran of the Vietnam War. He was very proud to serve his country and had great respect for the military.

Daniel was an Executive at Pepsi Co. for 33 years and retired in 2002. They moved around a lot with his career and spent many wonderful years living in Michigan, Mexico City, Moscow, Florida and Minnesota before retiring to Arizona in 2010.

Daniel loved his family and friends (even though he did not always know how to show it). He suffered from O.C.D (Old, Cranky & Dangerous). He loved his precious pups. He liked to work in his shop, do construction projects around the house, travel, camping, and he liked the idea of exploring and creating new adventures. He enjoyed off roading in the desert with his UTV and fishing in Canada. He enjoyed listening to country music and watching ID TV. He was a creature of habit and regimented with routine. He liked bacon, buffalo chicken wings, popcorn, lemonade & Diet Pepsi, and an occasional cheap cigar. Also, he had a newfound interest in getting several tattoos.  In addition, he was looking forward to a move in the near future to Tucson to be close to his son, Brad.

A joint celebration of life for both Daniel & Patricia will take place at Brenny’s Family Funeral Chapel on Monday, June 7, 2021. The visitation will begin at 10:00AM and the service will be at 11:00AM. There will be a lunch served immediately following the service in the reception room at Brenny’s.

To order memorial trees or send flowers to the family in memory of Daniel Weaver, please visit our flower store.