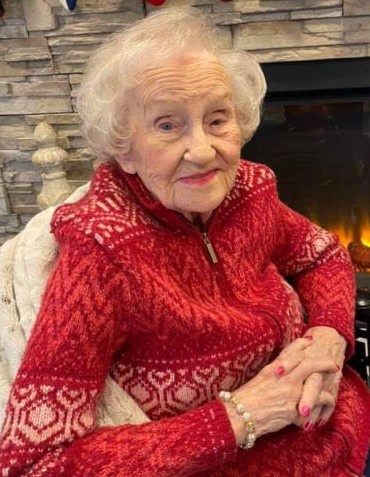 The funeral service for Betty Mae Furan, formerly of Fargo North Dakota, will be held on Saturday- October 2nd at 4:00PM at The Log Church in Crosslake, MN. Dinner with the family will follow the service.

On Wednesday, September 22nd 2021, at age 98, Betty passed away peacefully in her sleep at Whitefish at the Lakes Senior Living in Crosslake, MN.

Betty Fosteson was born in Fargo, ND to Francis and Virginia Fosteson on March 24, 1923. She was raised in Fargo, ND where she had many great memories with family and friends. In high school Betty was a very active student and served as a member of the Potluck social group, in addition to singing in a trio for the Fargo radio station, WDAY. Betty graduated from Fargo Central High School in 1941.

Betty was united in marriage to Maynard Furan in Fargo, ND on August 31, 1946 and was blessed with five sons: Bruce, Steven, Charles, David, and Alan.

Betty was a long-time resident of Fargo, ND and was active in volunteerism and her local church, First Methodist. Betty attended business classes at the Interstate Business College in 1942 and was employed at the Draft Board, Standard Oil as a Stenographer, and Sears Roebuck & Company. Before starting her career, Betty helped build wings for WWII planes. Betty mainly served the majority of her working career as a Supervisor at Blue Cross & Blue Shield Insurance in Fargo, ND and retired from her position in 1985.

In her free time, Betty enjoyed many activities including traveling, reading, singing, baking goodies, knitting, and New York Times Crossword puzzles. Betty enjoyed regular gatherings with her girlfriends to play bridge. Betty also had a love for the water and enjoyed swimming and time with friends and family at the lakes.

Betty will be remembered for her kind and generous spirit. She was known by anyone that knew her as someone who always found the best in everyone and was cheerful and positive in every situation. Betty had a strong faith and sense of serving others and was very outgoing and sociable.

To order memorial trees or send flowers to the family in memory of Betty Furan, please visit our flower store.