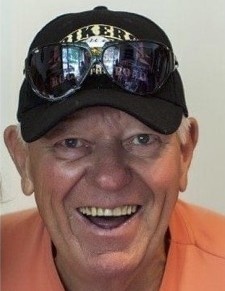 Allen Olaf Haugen, 81, of Staples passed away peacefully Sunday, March 14, at Harmony House in Motley where he had resided for the past 15 months.  He was a very caring, generous and fun loving brother, uncle and friend to many.

Allen was born on July 19, 1939 to Olaf and Hazel (Holsapple) Haugen in Staples.  He was a star athlete in Staples along with friends Bob Peterson, Ron Beachy and cousin, Roger Haugen.  He excelled in football, basketball, baseball, and track.  He graduated from Staples High School with the class of 1957.  He attended Concordia College in Moorhead for one semester before enlisting in the Navy in 1958.  His military service was spent mostly overseas aboard the ESSEX –class Aircraft Carrier the USS Ticonderoga in the Pacific around Japan, Okinawa, Vietnam and Guam.  He flew in several planes on the carrier as a Radar Operator.  Allen served four years in the Navy before being honorably discharged in 1962.

Allen worked different jobs before working as a dewaterer for SubSoil Dewatering for over twenty years.  He was then employed by Northern Dewatering in Blaine, Minnesota, as a job foreman for ten years.  Besides Minnesota, Allen worked in the states of Iowa, Wisconsin, North Dakota, Arizona, New Mexico, and California before retiring in 1993.

Allen enjoyed his job and spending the winters in Arizona with his sister, Geraldine, and brother-in-law, Jerry.  After retirement, Allen could be seen walking 10 miles a day around Staples in one of his famous jumpsuits and carrying his big, red sippy cup filled with cappuccino.  He was always willing to help anyone who needed help.  He loved talking with people and buying things for all the little kids he knew whether they were related or not.  He was a big man with a big heart who will be deeply missed by those who knew and loved him.

He was preceded in death by his parents; Olaf and Hazel Haugen, Sister, Geraldine Simon and Husband Jerry Simon of Staples and Mesa, Arizona; brother-in-law Jerry Peterson of Fergus Falls, and nephew Jim (Deb) Simon of Chandler, Arizona.

Services will be held at Faith Lutheran Church in Staples, Saturday, May 8 at 11am.  Visitation will be held one hour prior to the service.  Allen will be laid to rest in Evergreen Hill Cemetery in Staples following the service.  Lunch will be served at the church after the military tribute at the cemetery.

To order memorial trees or send flowers to the family in memory of Allen Haugen, please visit our flower store.